Imagine No Religion
Many years ago when I got my first decent computer, a Gateway 486 with Windows 3.11 and a 14.4 telephone modem (about a thousand times slower than my present DSL connection), I just automatically knew that the most important thing I could do on line was work towards the eradication of religion.


After a couple of years, people started quitting AOL and going on the real Internet, and I downloaded a cool thing called a Web browser, and that was it. I quickly learned how to make Web pages, and the first pages I made dealt with meditation, the philosophy of Alan Watts, and the insanity of religion. I’ve written many essays about religion. Then, in 2007, I discovered Sam Harris and his The End of Faith and Letter to a Christian Nation. This young neurophysicist was doing the same thing I was doing, but so much better!

However, even though his books were New York Times Bestsellers, I don’t even think he’s made a measurable dent in the number of people in the world victim to the computing virus of the human brain known as fundamentalist religion.

I wonder how Sam Harris would feel about the new crop of 15-year-old gamers trying to horn in on his anti-religion territory. As I was humbled by his work, I wonder if he’d be humbled by theirs.

Let’s do a comparison. After careful reading of his two books, I think that this one from The End of Faith is one of the most powerful paragraphs Harris has written:

"How is it that the absurdity of this idea [that certain books were written by God] does not bring us, hourly, to our knees? It is safe to say that few of us would have thought so many people could believe such a thing, if they didn't ACTUALLY believe it. Imagine a world in which generations of human beings come to believe that certain FILMS were made by God or that specific software was coded by him. Imagine a future in which millions of our descendants murder each other over rival interpretations of Star Wars or Windows 98. Could anything--ANYTHING--be more ridiculous? And yet, this would be no more ridiculous than the world we are living in."

Now compare it to this graphic put together by a 15-year-old gamer: 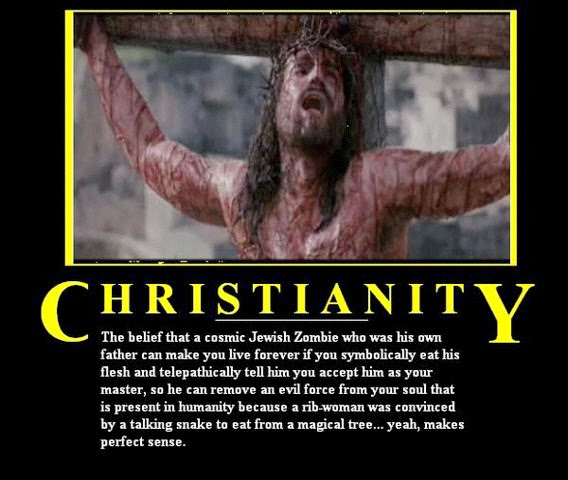 Ok, here’s another great Sam Harris quote, again from The End of Faith:

"Our situation is this: most of the people in this world believe that the Creator of the universe has written a book. We have the misfortune of having many such books on hand, each making an exclusive claim as to its infallibility. People tend to organize themselves into factions according to which of these incompatible claims they accept--rather than on the basis of language, skin color, location of birth, or any other criterion of tribalism. Each of these texts urges its readers to adopt a variety of beliefs and practices, some of which are benign, many of which are not. All are in perverse agreement on one point of fundamental importance, however: "respect" for other faiths, or for the views of unbelievers, is not an attitude that God endorses. While all faiths have been touched, here and there by the spirit of ecumenicalism, the central tenet of every religious tradition is that all others are mere repositories of error, or, at best, dangerously incomplete. Intolerance is thus intrinsic to every creed. Once a person believes--REALLY believes--that certain ideas can lead to eternal happiness, or to its antithesis, he cannot tolerate the possibility that the people he loves might be led astray by the blandishments of unbelievers. Certainty about the next life is simply incompatible with tolerance in this one."

How do you think it stands up to the following explanation of the Bible by a 16-year-old gamer. Note that to understand the gamer lingo used in this explanation--"cheat codes," "b&," and a few other gamer slang words and acronyms--you may need to refer to my little vocabulary key below the graphic. Cheat codes, for example, are keyboard shortcuts you can type into a computer game to give you special powers in that game. I once learned how to type a complicated 6-key shortcut to activate the God code on Doom, so I could kill the horrible aliens with total impunity, completely invulnerable to their attacks. After months of being beaten back by them, this was the only way I could see what the higher levels in the game looked like. So anyway, check this out: GTFO: get the fuck out

showing tits: The 4chan.org forum motto is “tits or GTFO”

b&: banned from a forum. "perma b&" means permanently banned.

trollbait: someone who falls victim (gets sucked into a prohibited negative conversation) to the troll

pwning: extreme beating (owning) of an opponent in an online game

I’m really afraid of religious people because they are, by definition, irrational and illogical. Also, it’s interesting that while all religions are perfectly analogous to computer viruses, just as some computer viruses are relatively harmless--merely a nuisance--some viruses can have catastrophic impact on your hard drive, for example deleting all your data or even corrupting all data on a whole network. So it is with Christianity compared to Islam. Islam seems far more dangerous.

However, Christianity as we practice it in America, is quite dangerous as well. Eight out of ten faith-based voters voted for George W. Bush in 2004, according to NBC’s Andrea Mitchell, despite the fact that this poster boy for the Devil had already murdered tens of thousands of Iraqis and basically destroyed the whole country of Iraq. But a huge difference between Christianity and Islam is that I can be very critical of Christianity and probably get away with it (although posting this blog entry definitely scares me--it doesn’t take much imagination to picture a Christian, in the name of the loving Jesus, knocking on my door and throwing acid in my face or in the face of my little daughter).

Think about the graphics these two bright teenagers have put together and then think about how crazy and hurt a person would have to be to actually be a fundamentalist! How can you trust such a person?

My niece Lisa watched in horror as a crazy man in San Francisco pounded his own face to a pulp against a cement garbage container. This is the physical equivalent to believing in a fundamentalist religion. Fundamentalist book-idolizing religion is intellectual suicide. And, in Alan Watts' words, "it is positive un-faith since it closes the mind to any new vision of the world. Faith is, above all, openness--an act of trust in the unknown."

Can you imagine no religion? John Lennon could. Listen to this amazing Lennon song. Do you remember it?

This sculpture (I don't know who did it or even its location) is the world "Christian" McCain voters are going to choose this November 4th.

Not one real Christian will vote for McCain. 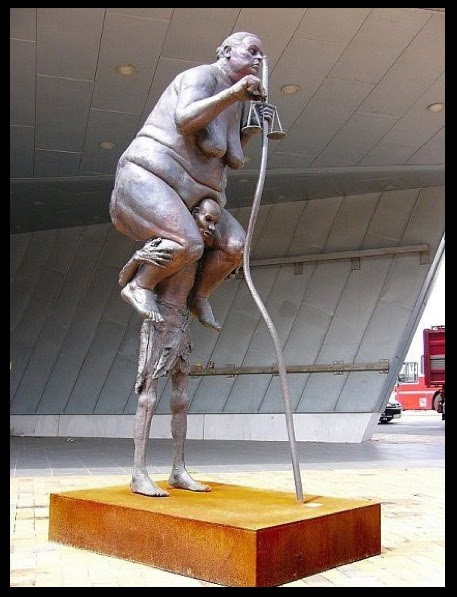