The Jerry Springer Show
I had a good letter published today in my town's newspaper. (I live in California and my town has 145,000 people.) They kind of messed it up by leaving out a key paragraph about Sara Palin. And they changed "a million" to "millions" regarding deaths caused by the American occupation of Iraq, which kind of blows my credibility all to hell. But still, it's a pretty radical letter and I'm happy they printed it. If you are interested, you can see the actual letter I sent them (scroll down past the scanned letter below)--the parts they messed up I've put in red. I hope by now everyone knows about McCain singing "bomb, bomb, bomb Iran" to the tune of the Beach Boy's "Barbara Ann."
Click on this scanned letter to make it much larger and easier to read: 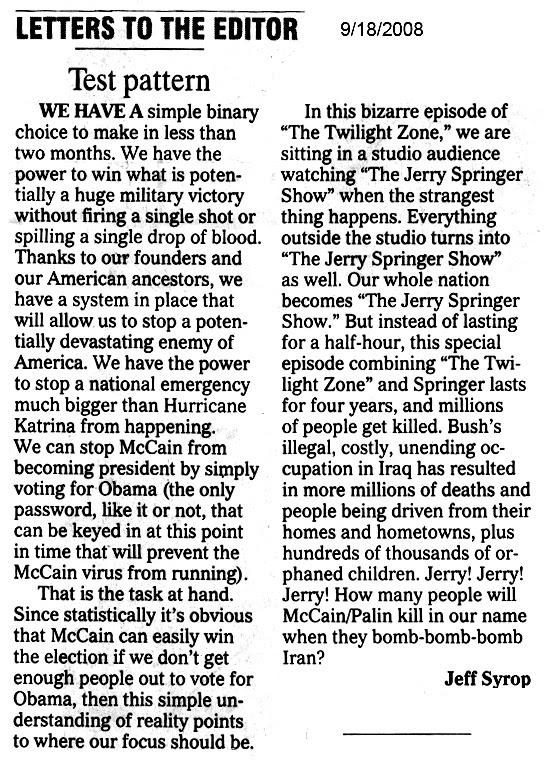 Dear Editor,
We have a simple binary choice to make in less than two months. We have the power to win what is potentially a huge military victory without firing a single shot or spilling a single drop of blood. Thanks to our Founders and our American ancestors, we have a system in place that will allow us to stop a potentially devastating enemy of America. We have the power to stop a national emergency much bigger than Hurricane Katrina from happening. We can stop McCain from becoming president by simply voting for Obama (the only password, like it or not, that can be keyed in at this point in time that will prevent the McCain virus from running).
That is the task at hand. Since statistically it's obvious that McCain can easily win the election if we don't get enough people out to vote for Obama, then this simple understanding of reality points to where our focus should be.
The choice of Sara Palin as future VP by the government that has broken our army, robbed our treasury, and destroyed our alliances throughout the world shows just how blatantly disrespectful the Bush/Cheney/McCain neocon government is towards We the People, especially disrespectful to the Republicans whose votes they expect to win.
In this bizarre episode of the Twilight Zone, we are sitting in a studio audience watching the Jerry Springer Show, when the strangest thing happens. Everything outside the studio where the show is being taped turns into the Jerry Springer Show as well. Our whole nation becomes the Jerry Springer Show. But instead of lasting for a half hour, this special episode combining the Twilight Zone and the Springer Show lasts for four years, and millions of people get killed. Bush's illegal, costly, unending occupation in Iraq has resulted in over a million deaths and over five million people driven from their homes and home towns plus hundreds of thousands of orphaned children. Jerry! Jerry! Jerry! How many people will McCain/Palin kill in our name when they bomb-bomb-bomb Iran?
Sincerely,
Jeff
Posted by Jeff Syrop at 7:52 PM No comments: