A rule I follow in my personal life, and also in my political life, is to deal with the biggest problem first. I believe that this approach often results in the smaller problems being solved automatically. Sometimes it's easy to figure out what Job One is, but when there are dozens of huge Job Twos looming, it's not so easy.

There was a time when the obvious Job One on the whole planet was to impeach Bush Jr and Dick Cheney. Now, with terrorist attacks in Paris and San Bernardino, Syrian refugees pouring into Europe, and ISIS spreading far and wide, we're seeing the result of our failure to accomplish this.

Today, I believe Job One for Americans is to get Bernie Sanders elected. It may seem that Hillary would be a fairly innocuous president, and in the scheme of things, we know that she would be a competent president. But what kind of country do we want to live in? An oligarchical empire that crushes millions of lives and destroys Earth's environment in order to add to the wealth of billionaires, while forcing us pay its bills? Do we want to continue living under our present system of soft fascism, in which TV's are used in place of gulags and America is slowly transformed into a Third World nation right before our eyes? 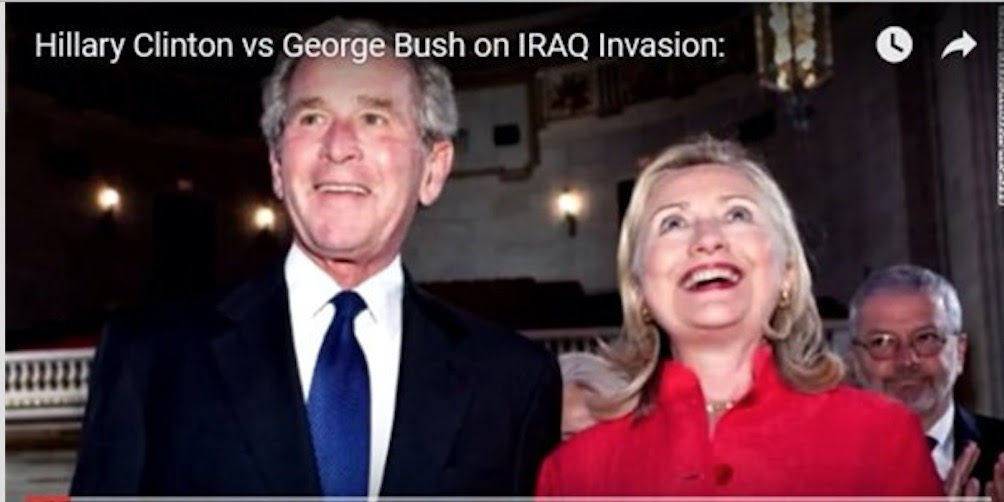 The main purpose of my blog post today is simply to share this video (2 minutes) of Hillary helping Bush Jr sell his illegal, immoral, and unwarranted 2003 invasion of Iraq. This invasion and occupation has resulted in the deaths of 1.5 million Iraqi people and 5,000 brave American soldiers, destroyed the whole country of Iraq, and recruited millions more terrorists, all while stealing about $3 trillion dollars from our Treasury, or more accurately, from our children's future labor!

Every minute our children and grandchildren work to pay taxes to cover the cost of this war crime will be a minute that they will be in slavery, having their labor stolen from them to pay for crimes of which they are totally innocent! We too are enslaved, every minute we work to pay the percentage of our taxes that goes to the Pentagon, that pays Bush's and Obama's war debts, that pays for the hundreds of F-35's that can't even fly correctly (over $100 million each!--the software required to fly them is already more than 24 million lines long, and programmers are finding it impossible to make the plane fly at night!). Hillary is very good at making people forget who she really is, but this old video, just 2 minutes long, is a good reminder that Hillary is a shape shifter.

We must avoid automatically caving in and voting for Hillary. If we vote for Hillary while Bernie still has a shot, it will be an admission that we live in a country where the government is absolutely no longer a servant but a master. We will be admitting that we have no choice but to be party to murder and to be complicit in the further breakdown of our country's culture and infrastructure. And we will be gladly accepting our position of privilege while knowing that millions of our fellow Americans are going without healthcare, without affordable college, without decent jobs, without safety in their neighborhoods, and even without enough food to eat.

How would Hillary handle the present Flint, Michigan infrastructure EMERGENCY? Would Hillary go after the perpetrators, who have knowingly poisoned tens of thousands of (mostly black) children? Here’s How Hard It Will Be to Unpoison Flint’s Water. There's a huge looming Job Two for you! What is the United States government going to do about this emergency affecting tens of thousands of Americans? This is staggering! And how many other of our cities, with their aging water, sewer, and natural gas systems, are on the brink of similar problems? 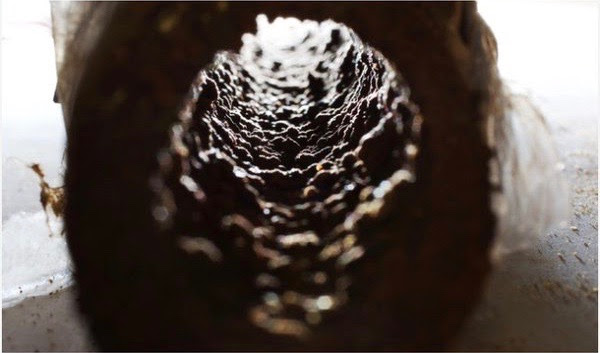 I think it's doubtful that the oligarchs will allow Bernie, a self avowed socialist, to actually win the presidential election, but people thought it was impossible for a Catholic (JFK) and for a black to become president, and yet these things happened! The prospect of Bernie winning is very exciting! How could young voters not be totally excited about voting for Bernie? His wining would be an actual revolution. Checkmate, elite .001 percent! We didn't like the only two flavors you made available to us, Trump/Rubio/Cruz or Hillary (Coke or Pepsi?), and you have been trumped! The elites lose! We win!

After losing Iowa, will Trump now deflate like a stupid looking balloon full of hot air and blow out of sight? My intuition tells me that many Americans are becoming willing and able to look at reality instead of meekly allowing politicians to trigger their feelings and control their loyalty by pushing their pre-programmed buttons--about gays, immigrants, abortion, socialism, etc. People are finally starting to notice what most of you reading this have been able to notice instinctively for years--that is, when a politician is talking total bullshit.

A quick check of videos on YouTube, such as Stephen Colbert's excellent Trump vs Trump debate, shows that Trump is all over the board on every issue. Electing Trump president would embarrass America before the whole world! And allowing Trump to have the keys to our nuclear arsenal would literally endanger every human on Earth. What a humiliating, insecure, frightening position to put people from other countries in, who didn't have the opportunity to vote for or against him. This election is important, brothers and sisters!

The Hillary vs Bush video I've linked you to here shows that Hillary is in no way a progressive, but truly just a neocon in Democrat's clothing.

Bernie is the only viable candidate, the only one actually talking about the wellbeing of the people. If he won, he'd still have to beat his head against the brick wall of Congress, but by the same token, we would have restored sanity to one of the three branches of our government! That's something we didn't achieve with Obama, who immediately appointed Goldman Sachs' Tim Geithner Secretary of the Treasury and doubled the size of the war in Afghanistan.

Another huge Job Two is Fukushima. The media behave as if the the earthquake and tsunami that disabled the Fukushima reactors 5 years ago were the disaster, but actually the disaster is just getting started, the biggest industrial accident in history, threatening Japan and ultimately the world. Can I interest you in a tuna sandwich? What will happen if they have to evacuate Tokyo?


And last but not least, Pussy Riot is back in the news! From the New York Times:

The Russian punk protest group Pussy Riot sashayed back into the public eye on Wednesday with the release of a music video savaging the country’s prosecutor general, Yuri Y. Chaika, who locked up three members of the group in 2012.

It is a black satire of the Russian criminal justice system, in which the women, playing prison guards, rap lustily about money and torture a man with hot clothes irons. 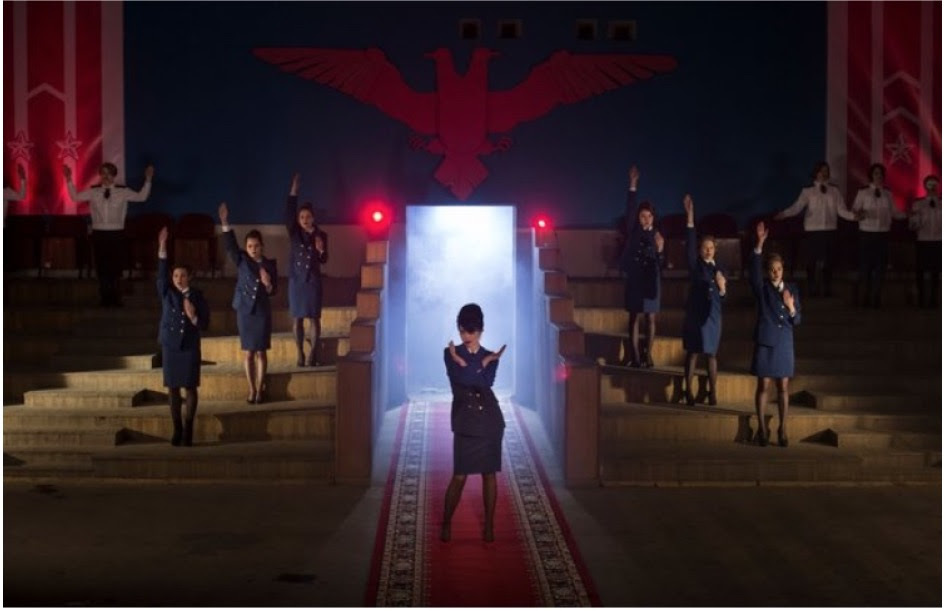 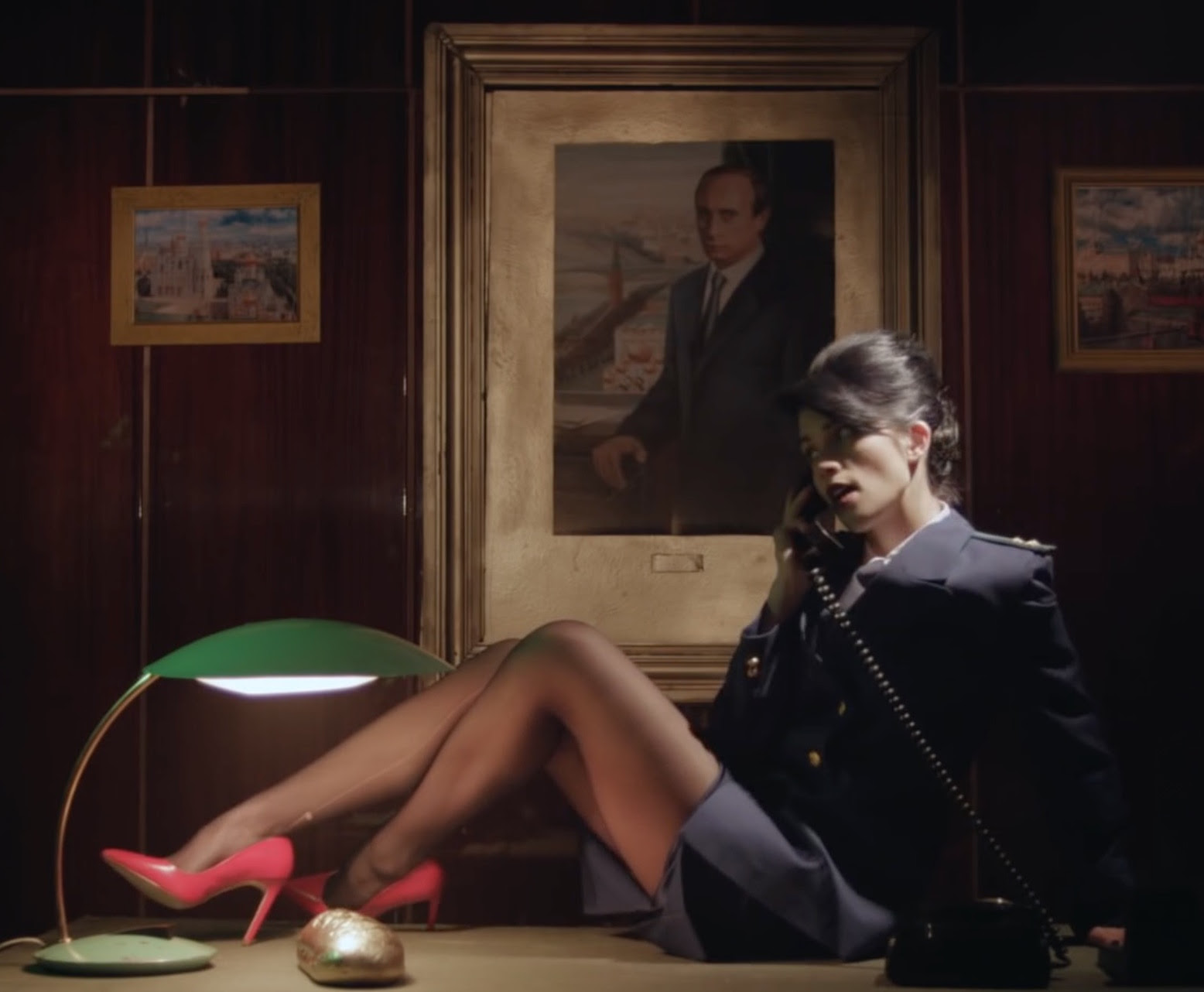 What do you think? Are we being naive if we once again let ourselves believe that a president can make a difference? Please click the comments link below and let me know.
Posted by Jeff Syrop at 9:45 PM